Uphyca is a modern witchcraft practice group, which is founded by Lumi Tanizaki in Aug. 2013. There are about 10 members in October 2013, and their activities are mainly internet-based.

Uphyca’s scope and vision of “witch” involves French-English traditional / hereditary craft, Gardnerian Wicca, 60-70’s neopagan movements and post-chaos current as atavism of Sumerian – Babylonian mystic religions. Uphyca’s trial is to connect these cultural impulses and its continuity to “now and here” spatiotemporal. It means Uphyca is not just a follower of those modern witchcraft contexts, rather, it sometimes derives from them and even challenges to revolve and to regenerate the pure impulse to the primal source. Here, I would like to give the outline of Uphyca based on some keywords.

-An online workgroup for solo witches

Uphyca is not a “coven”, which consists of 13 people, so to speak. It is an online work group for solo witches who have already experienced any kind of self-initiation. The references might be found around such of IOT, which advocates “pact” rather than “order”, and post-chaos online community such like Autonomatrix. With utilizing Evernote to share their dream journals and magical journals, Uphyca’s system is designed to exclude any necessity of offline meeting. This aims not only to communicate no matter where they live, but also to expand electronically the idea and exccution of coven.

"The electronically-expanded coven" refers to such as media evolution theory by Herbert Marshall McLuhan, postmodern shamanism by Terence McKenna, and even the topology of traditional witchcraft. Namely, "flying ointment" that witches in Middle Age Europe have used and its hallucinative "High sabbat" as coordinates of an astral gathering . In Sabbatic Craft which is one of revival witchcrafts, "High sabbat" is presented as magical TOPOS like Aethyr in Enochian magic. In the Middle Age, coven members gathered only once in a year pysically, but they shared the coven’s narratives and astral images, and left for "high sabbat" as collective consciousness by hallucination of "flying" beyond physical distances. It’s also an important exercise for Uphyca’s member to share and sync their narratives in cyberspace.

Uphyca means “to burn out” in language of Ainu (An autochthon in Japan which has cultural succession of Jomon period). Corresponding to Mother-earth goddesses and horned gods, Uphyca worships the ancient goddess we can find in Jomon artifacts (14,500 BC to about 300 BC) and its primordial image of “fire” which is preserved in shamanic maiden cultures of “Japonesia” area, which includes Okinawa, Taiwan, Polynesia in south, and Hokkaido to Russia in north. Although Uphyca members are self-initiated Witch, they are also engaged as “fire shaman” in worshipping Jomon goddesses. In a sense, Uphyca is a working group for Jomon-revival, contemporary shamanism and postmodern fire worship.

The “fire” for Uphyca is the primal energy we can directly experience. Also, it is a multi-layered metaphor which signifies life-consciousness and the nuclear energy exploding in Fukushima of 2011. a graphic image which Uphyca provides as its icon imitates the outlook chart of exploiting radioactive substances. It looks like a fire tongue of the Far East dragon. The fire worshippers, especially Yezidi in Ancient Iraq, connects to Western esotericism and the traditional witchcrafts with narrative of Tubal-cain’s blood line through Persia sufism. Uphyca composes new narrative which is directly bound up with “now and here” of modern Japanese, and seeks for the universal design of the spiritual community and its practice, Jomonian Witchcraft. 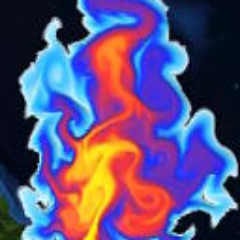 Uphyca’ platforms are, as I already mentioned, online tools such as Evernote and Skype. They share the exercises, missions, and gradual initiations as audio data and attempt not to use text data as much as possible, according to the fact that there was no writing culture in Jomon period. They emphasizes especially speaking and listening in their practices to attain the Japanese spirituality of Jomon period, and through that auditory and narrative practice as a fire shaman, Uphyca’s members will succeed to the Uphyca’s narrative as an oral tradition. Thanks to the characteristic, Uphyca’s gradual initiation only can be gained by the member’s psycho-somatic ability, not by description or any paper-based authority. As a result, they can preserve the security for essential, sacred occult community. Just like a song from a mother to a child, the vehicle of the meme, which are minimal and lively, will spread as parole on the cybernetic web.

The regular ritual of Uphyca so far is Wendnesday Fire Ritual which be held on every Wednesday. With listening to the audio data of guided meditation from 23:00 to 23:30, the members meditate the fires which are burning in the world then and serve to some astral works. This ritual is announced public in SNS such as twitter so non-members can participate in it as just liting their small fire for their own meditations during the time. It’s like a open Mass through cyberspace. Other than the fire shamen who are basically female and concentrate in the specific practice of Uphyca, there is also “HAIKA-KAI (Supporting society for fire worship)” which consists of members without practice. They, including male, agree with the concept of Uphyca and give interdisciplinary supports to Uphyca.

As we have seen up, Uphyca doesn’t just attempt to imitate Western Witchcraft nor to enjoy it as a hobby, but to expand electronically the feminine-psycosmatic culture, to design and practice the cultural device of “Magical Memory” or “Memetic Reincarnation” and to attain the narrative of the universal “Witch” which modern people can entirely live as their own life. As a meme, Jomonian Witchcraft and the methodology Uphyca advocates have already transcended spatiotemporal limitations. Thus, it could be spread and shared internationally.

There are so many things left I would like to tell about Uphyca. I and Tokyo Ritual will release e-books such as “traditional witchcraft series” “Luciferian Witchcraft series ” from the end of 2013, and discuss there in detail particularly about the connection between old Eurasia myth, European traditional Witchcraft, Neopagan as a counter-cultural movement in later half of 20th century, and Uphyca.